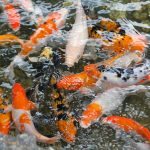 Koi keeping is a hobby generates obsession. And this obsession and popularity of having koi is growing by leaps and bounds. New koi clubs, auctions, trade fairs, magazines and breeding farms are sprouting up all over the United States. Additionally, manufacturers seeing the explosive growth of this enormous industry are investing time and money into developing new and specialized foods, treatments, filtration systems, pumps, etc. to accommodate the growing industry. But where did koi come from? And just exactly what makes a koi a koi? Aren’t they just carp or glorified goldfish? The truth behind these mysterious and beautifully colorful fish is very amazing and interesting.

Let’s begin with the most basic of questions. Where did koi come from? Most believe that the common carp were transported from Eurasia to the Far East more than 2,000 years ago and to Japan via China and Korea, where they had been bred as a source of food. Being kept in captive and restrictive conditions the carp bred and produced mutations. Over hundreds of years under these breeding conditions these mutations caused external differences, most noticeably striking color changes. These multi-colored fish were kept by farmers interested in raising the fish for hobby rather than food. It is estimated that the true colored koi originated in Japan from the Niigata prefecture during the early 1800’s. Today, koi are now bred throughout the world and the popularity of watergardening has propelled them to new levels. New varieties are being produced by Japanese breeders all the time, however, it usually takes many years to perfect a new strain and ensure that it breeds true each year.

Just where does the name koi come from? The name “koi” dates back to about 500 B.C. when it was first mentioned and recorded to describe a wild carp presented by King Shoko of Ro to Confucius on the birth of 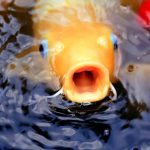 his first son. The Japanese word for carp is “koi”. Over the years, colored carp have been given many different names. In the early days, they were known as flower carp (Hanagoi), brocaded carp (Nishikigoi), fancy carp (Moyoogoi), or even colored and colorful carp. In Japan, they were originally called Hirogoi or Irogoi, meaning colored carp, but later they became known just as goi or koi. The preferred name in Japan for all single or multicolored carp is Nishikigoi, from the Japanese word “nishiki”, used to describe an expensive cloth of many colors imported from India. Nishikigoi are held in such high regard that they are recognized as the national fish of Japan. Now let’s look at the different types koi color types and their corresponding colors:

Showa- White markings with a black base

Tancho- Kohaku, Sanke, and Showa with a red marking on the head and no hi (color) on the body.

How should I keep my koi? Koi are remarkably hardy and healthy fish- much more so than goldfish. The average koi will live to between 25 and 35 years with some exceptional cases of koi living as long as 200 years! They will reach approximately 18″ within the first 3-4 years depending on the size of the pond, quality of food, and water conditions. The maximum length of the average koi is approximately 24-36″. Being that they do get to large sizes and the fact that most people overpopulate their ponds, it is best take these factors into consideration when planning your koi pond. Koi ponds should be a minimum of 4 feet deep and no more than 6 feet. You should plan on having at least 10 gallons of water volume for each inch of fish kept. For example, a koi pond containing ten koi 18″ each should have a minimum pond volume of 1800 gallons. This formula works well so long as you achieve proper filtration and water circulation. 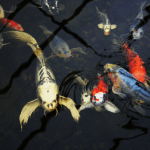 Koi pond filtration has been continually improving over the years. Many opinions have been formed about what types and sizes of filtration to use. We have been successful keeping koi in ponds 24″ to 36″ deep using a skimmer box, however, having a skimmer box where both a vertical mat and brushes can be used at the same time is very beneficial. Additionally, a biological filter or Biological Filter Falls should be used at the opposite end of the skimmer to assist in removing excess nutrients, break down fish waste, and increase water circulation. Adding a bottom drain that connects into the skimmer box is very helpful in removing waste that settles to the ponds bottom and helps to increase water circulation at the lower depths. However, if you are interested in breeding koi then larger and deeper ponds with increased filtration will be necessary.

Koi are fascinating fish with their beautiful colors, large size, and variety of markings. These swimming jewels have become as popular as the ponds they are kept in. If you have a pond consider keeping a koi or two- you’ll be pleasantly surprised by their unique nature and personalities!

Choose where to connect with us!